Csongor breathes tango every moment of his life!

Csongor started dancing ballroom dances at the age of 4. In 2010 Csongor hopelessly fell in love with Argentine Tango deciding to dedicate his life and dancing career to it.
Ever since falling in love with the dance, Csongor started studying and discovering the intricate details, mysteries and secrets of tango. He participated at workshops with Argentine and international tango maestros learning first-hand tips and secrets from each of them. This helped him develop a personal understanding and interpretation of his tango dance concept. His maestros are well-known within the international tango community, including names such as: 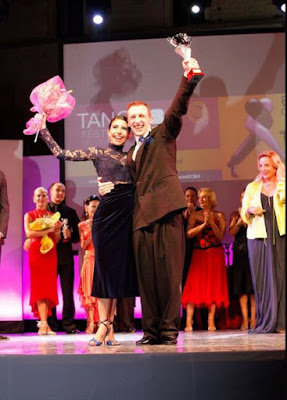 In 2015 together with Laura Iaru, they won the "6th European Tango de Salon Championship, July 2015 - Todi, Italy". At the age of 19 he become Europe's youngest ever champion! With this impressive win it is no surprise then that he was among the finalists at the World Championship in Buenos Aires, Argentina during the same year. There, Laura and Csomgor took part in famous milongas, as well as performing in them: Milonga Malena Sunderland Club, Milonga La Baldosa, Sin Rumbo La Catedral del Tango, Milonga Seguime Si Podes.
Besides all these achievements he danced with partners such as Antonella Terrazas, Solange Acosta, Juliana Maggioli and Laísa Souza.
Csongor began teaching tango in 2011 on a weekly basis first in Brasov, Romania. Later on, he has been invited to teach in workshops and perform at tango events and weekends, as well as at festivals in Romania and abroad in the following locaations:
Csongor is tango DJ since 2013 and he has been DJ-ing and sharing his knowledge and passion for music, at regular milongas, at tango events, festivals and marathons in:
He made the choreography for a men’s solo tango dancing scene in a theater play, called “The Pheasant” by George Feydeau in which he also performs tango, every time the play is on stage in Brasov, Romania.
To broaden his theoretical knowledge on the movement of the human body he has completed his studies at the following universities:
It is not a surprise then that Csongor is currently a doctorate student at the National University of Physical Education and Sport of Bucharest.
During his university studies, he had the opportunity to explore a number of topics complementary to the Argentine tango:
In addition to his university studies during his free time he studied:
His research works on the Argentine tango and on ballroom dance, he published in scientific journals:
http://webbut.unitbv.ro/Bulletin/Series%20VIII/2019/BULETIN%20I/07_Csiki%20Csongor-corectat.pdf
http://webbut.unitbv.ro/BU2018/Series%20IX/2018/BULETIN%20I/11_Kicsi.pdf
http://webbut.unitbv.ro/Bulletin/Series%20IX/2019/BULETIN%20I/12_KiCSI_DOI_44.pdf
Ultimately, on the back of this short synopsis, Csongor believes in the power and beauty of embracing tango, in the elegance of tango by developing the superior and perfectionist technique, understanding the human body and its biomechanics, spiced with soul, passion and musicality. But foremost Csongor wishes that people also discover these wonders of tango through the joy of performing the dance!
Home
Subscribe to: Posts (Atom)